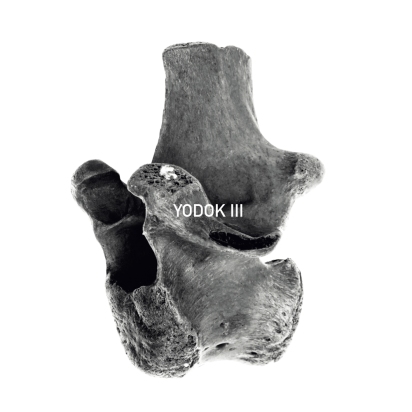 When a reissue appears or music gets ‘the box set treatment’, it’s often an indication that a band has run its course, an artist has died or money needs to be made. In this case, it’s somewhat different. When Yodok III (TF138, 2014) and The Sky Flashes. The Great Sea Yearns. (TF144, 2015), both vinyl-only releases, came out, one could already hear a band that was unlike any other. Granted, the trio had some traits in common with kindred spirits in the realm of drone-, minimal- or post- whatever music, but there was a singular approach at work, further enhanced by the two tape releases (TF148 and TF149) that were added to the discography.

My appreciation of the members’ individual musicianship and, especially, their collective sensitivity should be obvious from the original liner notes that are also included here, but along the way my esteem intensified, as I noticed that despite so many other activities, the three musicians remained not only wholly dedicated to this project, but also further refined and deepened their approach. A key period, it seems to me now, was May of 2015, when I saw two performances that completely caught me off guard.

The first one, on the 2nd of May, took place at the Rewire Festival (Den Haag, Netherlands). Due to some technical issues, the band was only given a 30-minute time slot, but they filled it with a smashing performance that added a seething, white-hot intensity to their approach. Then, thirteen days later, I witnessed their fabulous performance at Dokkhuset (Trondheim, Norway), where they managed to incorporate a similar energy into a longer set, that would eventually be released on Belgium’s Consouling Sounds as Legion Of Radiance: Live At Dokkhuset in 2016. This later recording does not so much represent another or better version of the band, but one that renews from within. They keep adding layers, sounds and ideas to explore, and that’s remarkable, given the schedules of these musicians. Tomas Järmyr, already all over the place with projects that are as diverse as they are challenging, joined the crazy Italian band Zu in the summer of 2015, while Kristoffer Lo remained a core member of the increasingly popular indie pop band Highasakite, and further became one of the key players of the young Norwegian scene (his album with the Trondheim Jazz Orchestra and the solo release The Black Meat in particular are mandatory listening), and together they released their (quite overwhelming) third album as a duo: Yodok IIII.

Dirk Serries remained active in the field of guitar minimalism and is currently recording the next (and final) Microphonics chapter, but also delved headfirst into the world of improvised music the past years. He found several new collaborators and has steadily been adding to his already massive discography. Also for Yodok III, things keep moving on. In April of 2016, their concert at the fantastic Roadburn Festival (Tilburg, Netherlands), home of all things heavy, was considered a highlight of the weekend by many, and as I write this, Tonefloat is preparing a release of the performance. Only a few weeks later, the band also made a strong impression at the remarkable Belgian post-rock festival Dunk!, despite a PA system temporarily breaking down during their set. But the trio resolutely battled on and finished with overwhelming energy. Once again, proof of their commitment.

What it all boils down to, is that Yodok III has become something special: a working band (albeit not in the conventional sense) that came out of the gates with a fully-formed style and identity, but that shows no signs of creative stasis, or a kind of laziness which no one would hold against them. The concerts of 2015 and 2016 have confirmed that Järmyr, Lo and Serries remain 100% dedicated to their unwritten agreement to never settle for something average, and that’s what makes writing this ‘foreword’ such a feast. It’s not just about the past, about praising these two excellent releases that are made available on CD for the first time and prove that the band had something special going from the start, but it’s also about progression, about the future and the prospect of comparing the different phases in the band’s existence. It’s a ride with an increasingly addictive appeal, so if this is where you join in: welcome, and be prepared for a magnificent story that’s evolving as we speak.