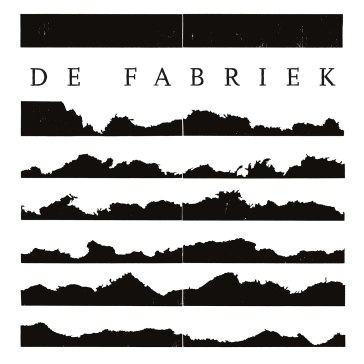 The world of noise, ambient and cosmic sounds doesn’t get much obscure than De Fabriek. They have been active since the late seventies, as a band and a label of the same name, and in the 80s they were very active players in the world of cassettes and exchanging sounds through mail. We haven’t heard anything from them in ages. This new release, their first on over a decade, sees some old players again, such as Klaas Mons (who was once responsible for the three concerts De Fabriek ever did), Nico Selen (from O.R.D.U.C.), Alex Nanuru (who contributed voice to Neveleiland, one of De Fabriek’s best LPs from the 80s) and Richard van Dellen himself. Other members (‘workers’ is how De Fabriek, translated ‘the factory’, called them in the past) here are Simon Steiner and Jan Peter van Aalst.

What is De Fabriek and their new LP TERUGKEREN all about? That is not an easy thing to say, as there is no defined De Fabriek sound. Over the years the group experimented with ambient music, with noise, with rhythms, industrial music and perhaps even cosmic music. This release of Terugkeren sees a bit of all of this and that makes release a nicely varied journey as well as an introduction into the world of De Fabriek, and we find the gentle guitar strumming of Machinerie/Luide Muziek next to a heavy guitar sound in Verleden, dark ambiences of De Terugkerenden and Zwarte Engelen or radio play like Rustpunt, with Alex Nanuru’s voice reciting a story (this could have easily been an outtake of Neveleiland). Guitars play quite an extended role here, but are transformed by the use of sound effects, without sounding too droney. De Fabriek keeps their pieces short and to the point. It is all in all a wonderful collection of pieces and it’s great to hear something new from De Fabriek. (txt with thanks to Frans de Waard).

TERUGKEREN is manufactured on 180 grams vinyl, and packed in a deluxe triple foldout sleeve with insert. The LP is limited to 300 copies. Release date: September 29, 2017. Available to pre-order as usual in our store.