Streams Of Consciousness. Bit of a long story this one. The idea was to have 3 Streams Of Consciousness records done at a small pressing plant in France. Turned out be a disaster. In the end we had them done at a regular plant here in Holland. After a year they showed up anyway. So here they are. 130806. 131006. 131106. Three for the price of one. A Limited 3LP edition of 111 copies.

First By A Whisper Then By A Storm. Another one from the vaults. Back in 2007 we had some copies left of the 2004 Fear Falls Burning Tour CD and added a record with four previously unreleased tracks. With only 136 CDs left, that was the exact number of copies released back then. Luck caught on us when we found a box of records. So here ya go. Limited LP edition of 17 copies. 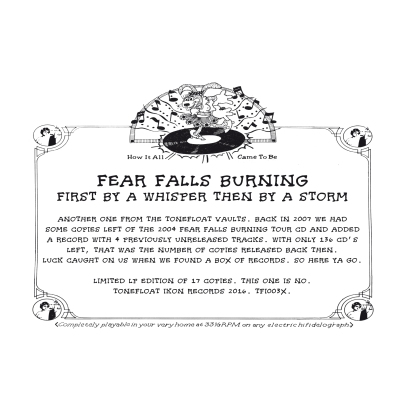