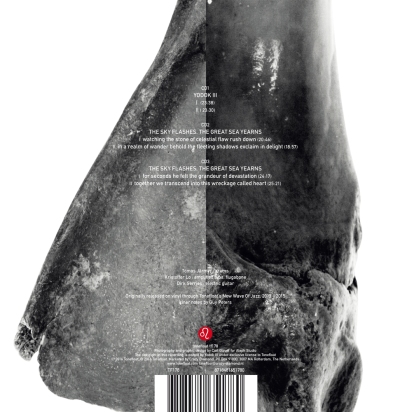 When a reissue appears or music gets ‘the box set treatment’, it’s often an indication that a band has run its course, an artist has died or money needs to be made. In this case, it’s somewhat different. When Yodok III (TF138, 2014) and The Sky Flashes. The Great Sea Yearns. (TF144, 2015), both vinyl-only releases, came out, one could already hear a band that was unlike any other. Granted, the trio had some traits in common with kindred spirits in the realm of drone-, minimal- or post- whatever music, but there was a singular approach at work, further enhanced by the two tape releases (TF148 and TF149) that were added to the discography.

Despite being the first release ever on the Dirk Serries curated A New Wave Of Jazz label, it became obvious that the label not really matched the band’s momentum, despite the in situ approach that defines A New Wave Of Jazz. The Yodok III 3CD box marks the debut of the band on Tonefloat. Housed in a Carl Glover signature design box YODOK III contains the band’s eponymous 2014 debut (CD1) and The Sky Flashes. The Great Sea Yearns. (CD2 and CD3). A 15inch poster with liner notes by Guy Peters completes the box which is limited to 500 copies.

More on Yodok III’s New Wave Of Jazz era in this beautiful feature by Guy Peters.